Digital ideas for a successful village and community life

Around thirty Lower Austrians were among the selected participants who came together in Waidhofen/Ybbs from 30.8. to 1.9. to develop possible digital solutions for a successful village and community life. In the form of a so-called „Sandpit“ innovation workshop, participants developed and discussed different ideas to achieve this aim.

Involving citizens to use digitalisation for Lower Austria and its people

The reason for this process, which started with a broad stakeholders survey and now culminated in the interactive, three-day workshop, was the endeavour of the Office for Technology and Digitalisation of the State of Lower Austria to create innovative, digital solutions that provide direct benefits for citizens. The OIS Center, together with the NEA Studio, developed the „Sandpit“ approach to involve citizens in developing and discussing ideas and supported the State of Lower Austria to implement it in the three-day workshop. “We are excited to support with our Open Innovation in Science methods the people of Lower Austria to take the local development of their villages in their own hands”, says Patrick Lehner, director of the OIS Center implementation programmes.

A top-class jury consisting of experts in the field of „Smart Villages“ from Austria and Germany as well as from the Lower Austrian administration evaluated the different ideas. At the end of the workshop, the jury objectively and transparently assessed the potential innovativeness, relevance, scalability, feasibility and appeal of the ideas developed for the State of Lower Austria. Due to the very innovative nature of the ideas, the jury surprisingly decided to select two of them that will be now further supported by the Office for Technology and Digitalisation.

NENA – THE NEIGHBOURHOOD NETWORK is a project to develop a platform in which citizens of a municipality can get involved with their ideas and take responsibility for „doing it yourself“ (DIY). The platform publishes project proposals, but also concerns, which can then be supported, taken over or implemented by citizens themselves, by businesses or associations as well as by the municipality. This strengthens and actively promotes togetherness in the community.

THE FRANZ – a futuristic, visionary idea for the future of a smart village and of community life. In this project, the needs of the people are brought to the fore and physical spaces are combined with digital assistance. The latter uses voice control to organise, for example, a lunch in a coworking space or individual mobility solutions, and finds new social contacts by means of interest matching.

Ideas are already being further developed

In addition, the idea of a neighbourhood network will already be incorporated into the international digital E³UDRES² Hackathon of the University of Applied Sciences St. Pölten on the topic of „Smart & Sustainable Regions“ in September 2021.

In the course of the Digital Innovation Hub OST (DIH-OST), funded by the State of Lower Austria, one of the ideas from the workshop will be further developed as a prototype with interested municipalities.

on the Sandpit procedure: noe.gv.at/noe/Digitalisierung/Sandpit_Dorf_und_Gemeindeleben 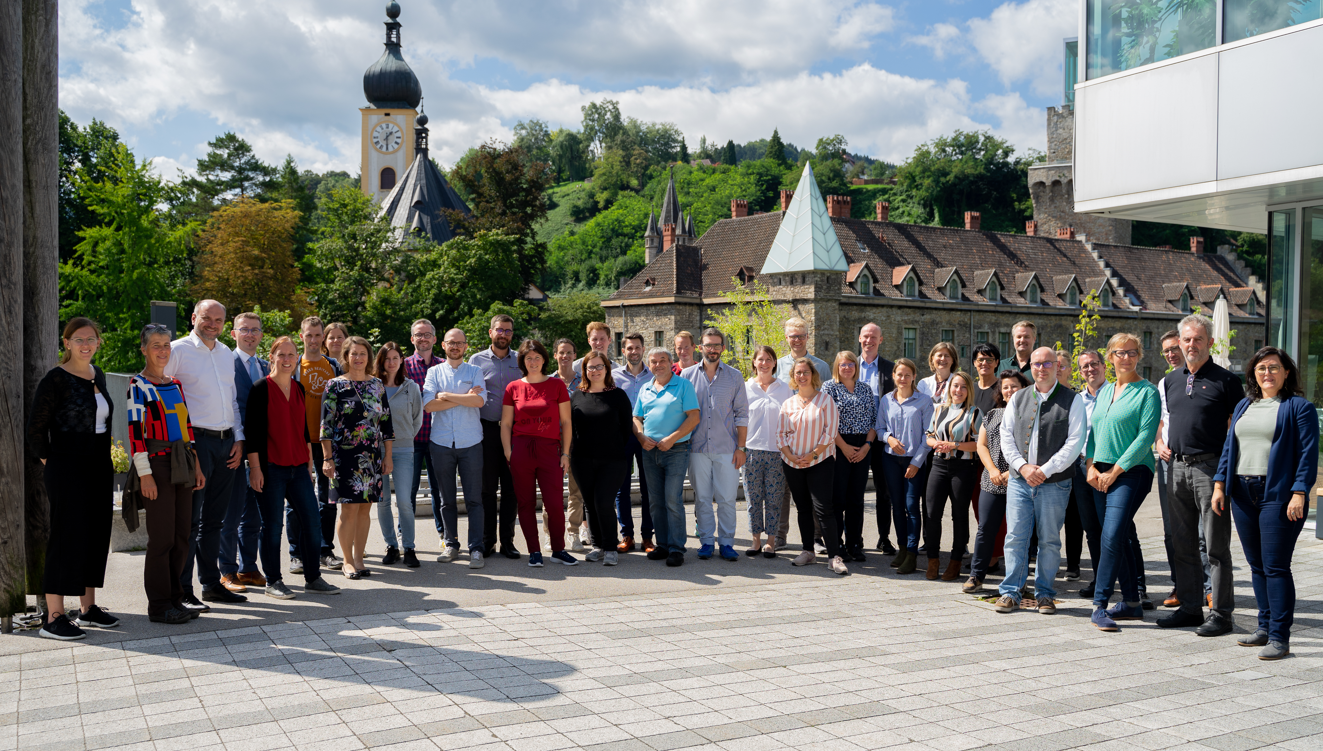 a.
a. Participants of the Sandpit Workshop. Picture © Foto & Video Mostviertel/Konstantin Wenzl